A series of cell-phone screenshots of the Bubbly wiki. The main color is a coral pink and it uses the Bubbly logo, which is the word Bubbly with the Y replaced with a glass of champage. The first is of the front page, where the reader is searching for ‘Teddy’. The header reads: This is the unofficial database of knowledge on the Bubbly Original Universe of soap operas, featuring 348,602 articles created and edited by Bubbly fans. Account creation is currently closed and we are not accepting applications for new editors. For information about Bubbly imports, you can consult the Sudz wiki.

Article intro: Dr. Theodore “Teddy” Maximillion III, MD[1], NBCCH[2], DD[3], CRO[4], CBM[5], MS[6] is one of the main characters of Gilding Forever, and one of the only characters to have remained consistent since season one. A surgeon with a massive ego, his fixation on his own looks has lead him to get extensive plastic surgery at least twice, but it’s implied to have happened several more times off-screen[7]. He often claims that ‘MD’ stands for ‘Muscle Doctor'[8].

Other characters treat him as a buffoon, supported by his tendency to make absurd or foolish claims followed by his catchphrase, “I’m a doctor.” However, Teddy has been revealed to have graduated from medical school at the top of his class[9], and during the Moonbase Symphonies proved himself as a master tactician[10]. Arsene Lupin once referred to Teddy as one of the best officers in the Time Corps[11]. Teddy has been married to Trixie Maximillion-Gold since the first season, and they are the only couple never to have divorced or had children. The character of Teddy was based heavily on real-life billionaire Dr. Thomas Wayne, but now draws some inspiration from his son Bruce Wayne[12].

There is a break, and the next screenshot begins slightly before Fernando and Nurse Kate.

In the end, Teddy is allowed to change his name and keep his citizenship without having to surrender Maxmore Incorporated’s assets to the French[27]. Armand insists that he will not give up, but is never seen again after the trial. In season eight, it’s implied that he was deported, but no reason is given as to why[28].

Teddy’s first appearance in season six reveals that he has already changed his last name back to Maximillion, believing that he both proved his point and achieved a moral victory. Rather than harbor animosity toward Fernando after their courtroom brawl, Teddy expresses concern, immediately noticing the signs of Fernando’s cocaine addiction. Fernando responds poorly to Teddy’s attempts to help, and the two wrestle until Nurse Kate intervenes[29]. While most of Fernando’s rehabilitation is taken care of by Nurse Kate, Teddy makes occasional housecalls throughout the next two seasons. Because he always makes a point of warning Fernando not to hurt Kate, these visits usually end with a fight between the two. In season seven, Teddy frees Fernando and Kate from their cabin after the avalanche, having noticed while skiing that it had gone missing[30]. In the season finale, Teddy acts as Fernando’s first man, carrying him bodily into the cathedral when he thinks he might have cold feet[31].

After Senator Kyle is found dead beneath a broken window, Teddy is arrested and charged with his murder[32]. Because he had previously thrown Senator Kyle out of the window of the courtroom, few believe his proclamations of innocence. When Trixie makes a comment about the broken glass, Daisy decides to investigate. She realizes that the glass should have been too thick to allow a person to break through it under normal circumstances, even when thrown. When she presents her findings at the science fair, Principal Candy calls Lola and James to a meeting out of concern[33]. Lola, recognizing the importance of the evidence, takes it to Fernando. Unfortunately, Fernando is the prosecutor in Teddy’s trial. While Fernando considers keeping this evidence to himself, he ultimately decides this would be unethical, particularly when Trixie continues to allow Kate to train dolphins in their pool[34].

During the trial, Teddy makes no secret of how much he despised Senator Kyle, despite Fernando’s deliberate avoidance of the topic. When Daisy’s evidence is presented, he disputes it, insisting on his ability to throw any man through any window. When Teddy attempts to remove his shirt as evidence, Fernando tries to stop him, and the two wrestle on the floor of the courtroom[35]. Finally, Daisy arrives with new evidence she found at the Midwesticorp glass factory, proving that Edwin Cummings had been cutting corners and producing unsafe panes of glass. Edwin is arrested, and Senator Kyle’s death is ruled to have been an accident[36].

The credits scene of this episode implies that Senator Kyle was actually murdered by Trixie, who took deliberate advantage of Edwin’s criminal negligence[37]. This is never addressed or acknowledged in any subsequent episodes. This is widely agreed to mark the beginning of the Secret Agent Trixie Gold arc, the first secret arc in the Bubbly Original Universe.

Three months into Vivien and Wesley’s international cruise, it’s revealed that Teddy and Trixie have been on board the ship the entire time, and may even have been witnesses to the theft of the Mathis Diamond. However, neither of them are able to provide any useful information, having been absorbed in midnight shuffleboard at the time.

There is another break, and the next screenshot begins slightly before The Gunshot.

The writers chose to accept the write-in candidates, and consequently, Estelle the Dolphin was elected mayor of Hillsford Heights. At the after-party, Teddy confesses he never really wanted to be mayor. He only wanted the title in order to add it to his collection, and was then too embarrassed to drop out of the race when things escalated[58].

While walking home from the election night after-party, Teddy and Trixie are confronted by a mugger named John Bush who claims to be armed. Trixie seems to faint, and Teddy uses the opportunity to attack John. Teddy’s belief that Trixie fainted is evidence that at this point Teddy is unaware of Secret Agent Trixie Gold, rather than a co-conspirator. The fight between Teddy and John is the only such fight in the series not accompanied by Teddy’s Fight Theme. While Teddy eventually succeeds in getting the gun away from John and knocking him unconscious, he is shot in the process[59].

Comatose, his friends from around Hillsford Heights visit Teddy in the hospital, each one taking time to reminisce about the adventures they’d had together. The special two-hour clip episode ends with Fernando finally returning from Quebec. When they are alone, he admits to the unconscious Teddy that he had been having an affair. Teddy then sits up in his hospital bed, and punches Fernando in the face[60]. While subsequent episodes showed Teddy in physical therapy, it is not long before he makes a full recovery.

John Bush’s trial is one of three courtroom scenes in the show’s run not to have included physical violence. Instead, Fernando gives an impassioned speech that many have interpreted as the writers addressing the real-life Crime Alley Killer. John is found guilty, but is shown leniency when Teddy intervenes[61]. Eric Mays has stated that John Bush’s breakdown was not scripted, and he was simply overwhelmed with emotion during the scene[62]. The episode received extensive news coverage, and Gilding Forever was nominated for six Emmy Awards[63].

S:13-E:1 famously aired only a month after the fatal shooting of Thomas Wayne and his wife. Responding to accusations that the episode and its plot were insensitive, then-showrunner Isaac Noble released a public statement explaining the show’s intentions. Because Teddy was well-known to be a kind of satire of Thomas Wayne, the writers felt their previously-planned storylines would no longer be appropriate. Isaac considered himself a friend of Mr. Wayne, and stated that the episode was written ‘in grief’.

“We never intended to imply that Thomas died because he’d done something wrong that night. The Thomas Wayne I knew always did the right thing. I wanted to write a world where doing the right thing means you get to live happily ever after.” – Isaac Noble

This statement included the first instance of the phrase and meta-rule Teddy Rex Will Never Die. Teddy has been presumed immortal since the release of the statement.

Teddy does not appear again until season fifteen, when Friar Diego is preparing to leave Hillsford Heights. He is stopped by Teddy, who reveals that he believes his house is haunted by the ghosts of the restless dead.

This is where the screenshots end. 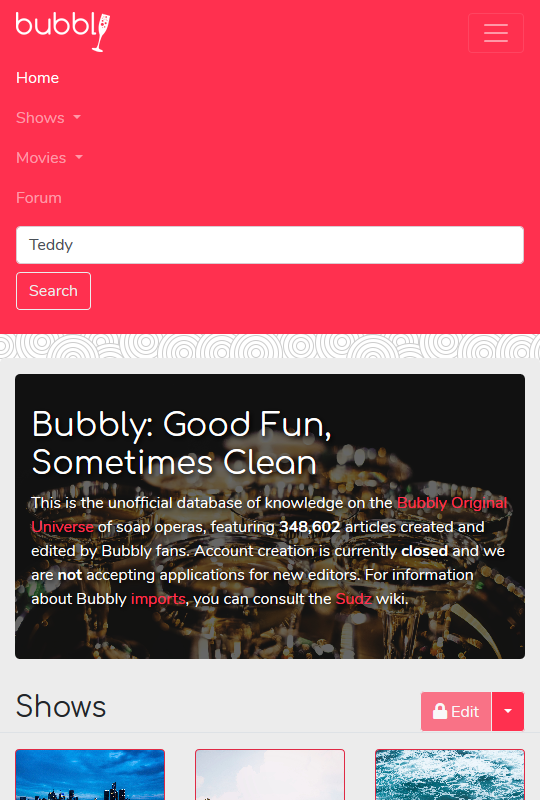 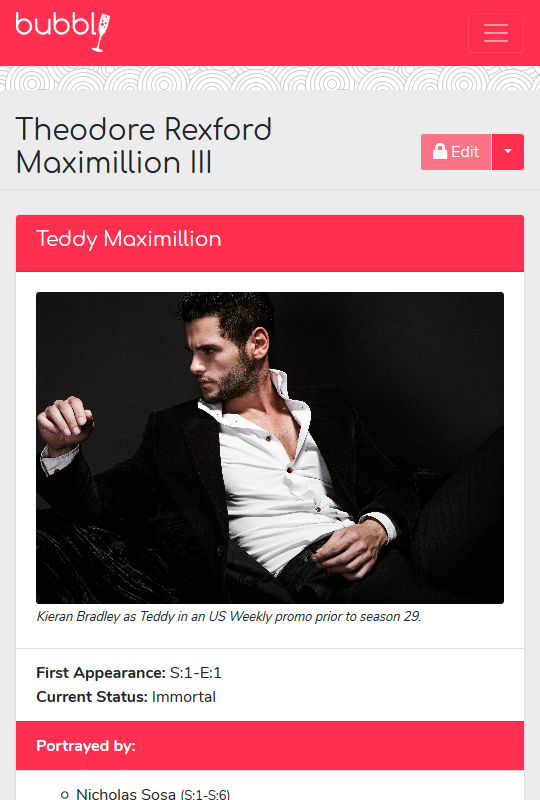 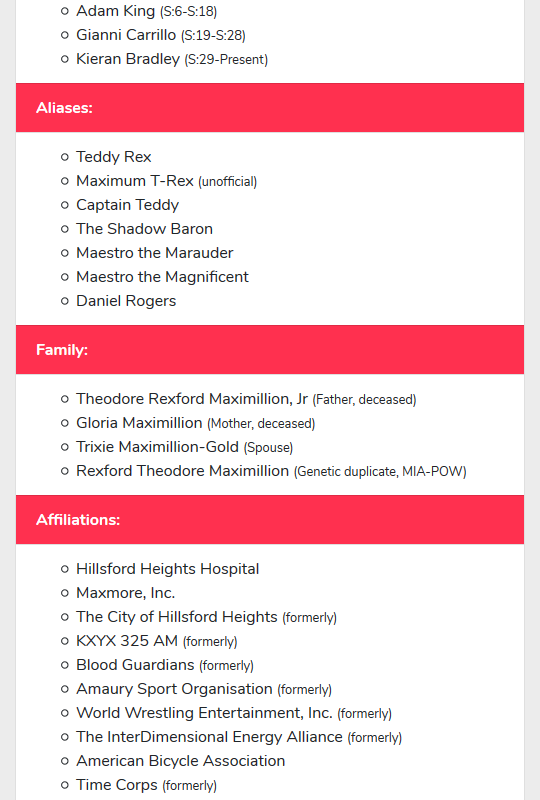 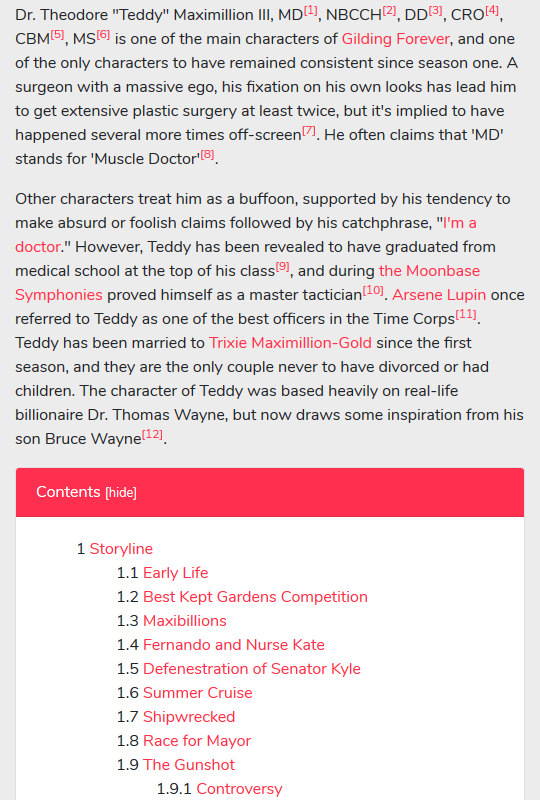 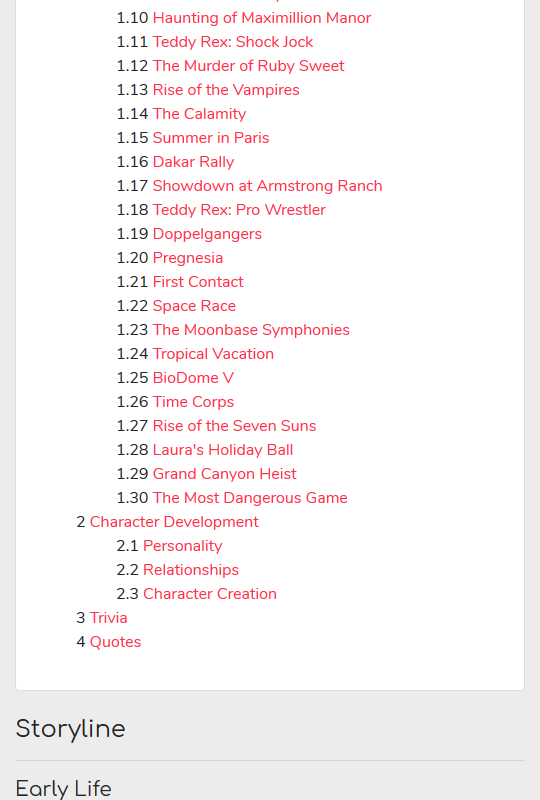 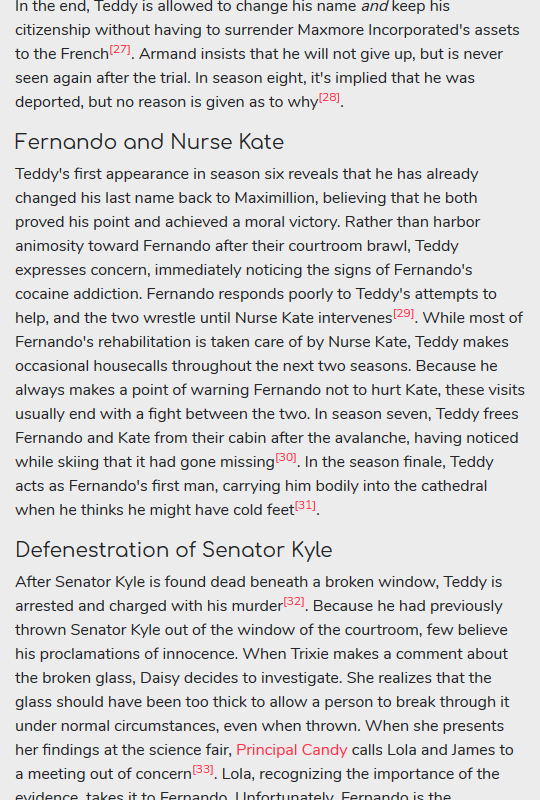 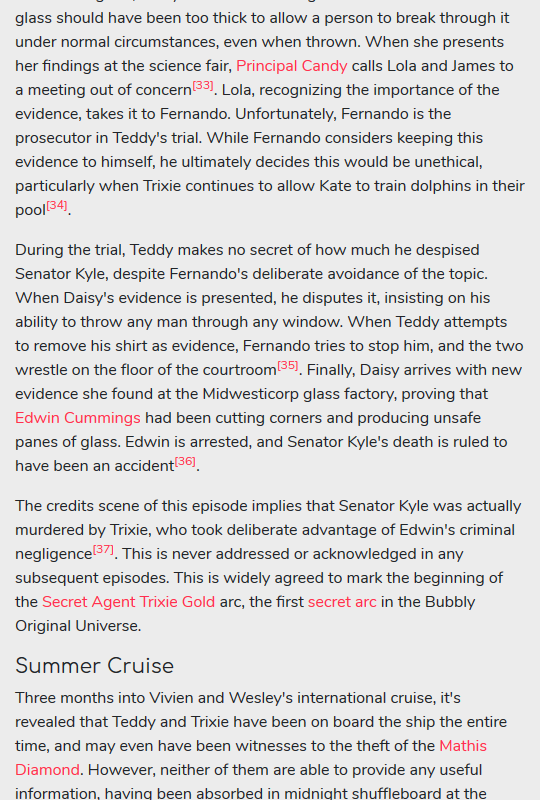 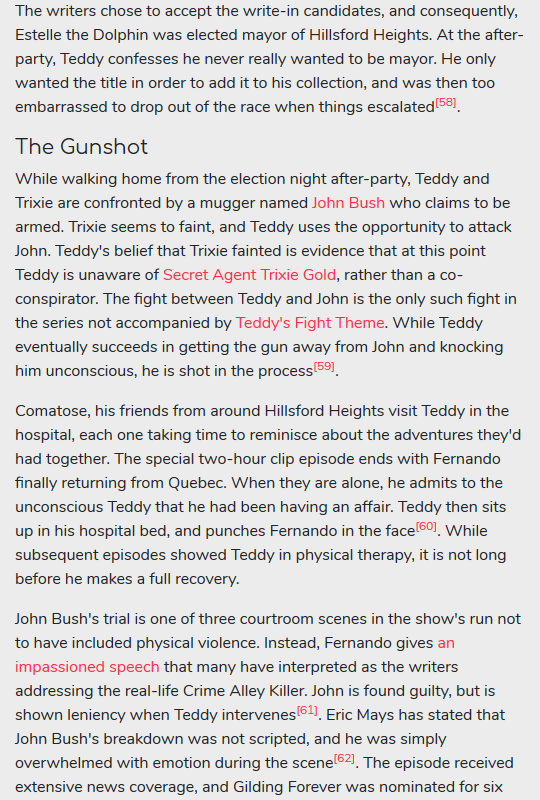 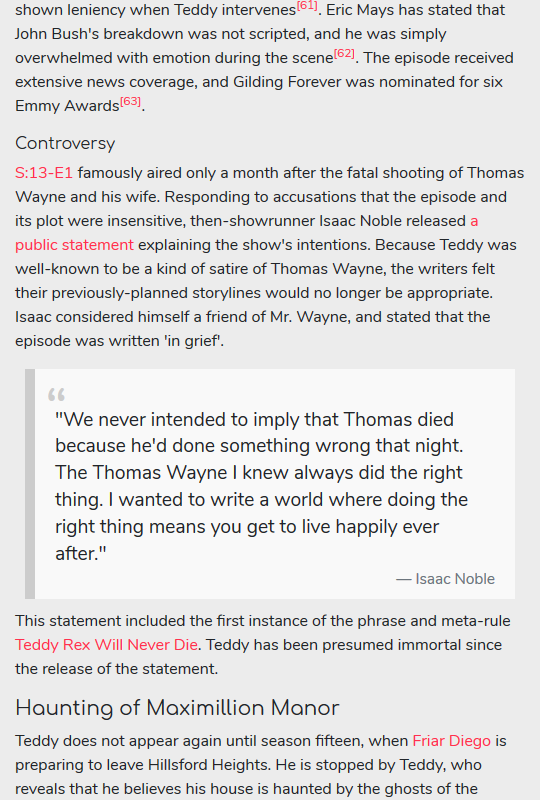 (Thank you to Anon for requesting this… deep lore? Bubbly was previously mentioned in the Wayne Enterprises megapost.)